Research and Development departments at leading paint manufacturers have been working for an extended time on the challenge of using photocatalysis in paints. One characteristic of the photocatalytic reaction is that it attacks organic substances, including organic components in the binders of conventional paint systems. This means that the photocatalytic process virtually destroys the paint itself as it breaks down the binding agents in the surface. The consequences are chalking and premature weathering, with a corresponding shorter life expectancy for the paint. It reacts differently to inorganic, silicate binding agents. This is because the binder is not attacked by the photocatalytic reaction.

With KEIM Soldalit-ME we succeeded in engineering a long-lasting coating with enhanced self-cleaning properties by combining a photocatalytic pigment with a mineral binder system. 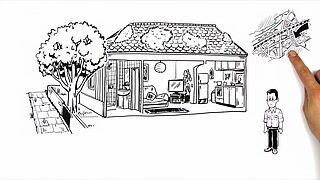 Effect 1: Self-cleaning effect
A hydrophilic surface supports self-cleaning of facade surfaces when they are wetted by rain or moisture. A photocatalytic silicate facade paint becomes hydrophilic under the influence of light. The coating reduces the surface tension of the water, which makes it easier to wash away dirt.

Photocatalytically active mineral coatings help to break down air pollutants. Photocatalytic mineral paints in exterior spaces contribute to the decomposition of atmospheric air pollutants such as nitrogen oxides, greenhouse gases and superficial contaminations. By doing this, the durability of the inorganically bound coating is not reduced.

Photoactive coatings decompose many other pollutants in addition to nitrogen oxides, for example sulphur dioxide (SO2), ammonia (NH3), carbon monoxide (CO), solvents, formaldehyde or even fats and acids.

With KEIM Soldalit-ME you are not just getting a longlasting, clean facade with paint that will not fade, you are also doing your part in keeping the air clean!