The cornerstone of our success story was laid when the craftsman and natural scientist Adolf Wilhelm Keim was granted the patent for the mineral paints he developed in 1878. "KEIM Mineral Paints" are considered synonymous with colour brilliance and unrivaled longevity. The working principle of their unequaled longevity has always remained the same up to today: the silicate binder waterglass forms an inseparable chemical bond with the mineral substrate during the chemical process of silicification. Peeling paint layers, such as those seen with synthetic resin paints, are eliminated when using a mineral-silicate coating.

Paints for people and architecture

The development of innovative and even revolutionary products is visible throughout the long history of our company. Mineral paints by KEIM are a constant feature in architectural history of the 20th and 21st century: from the Historicist Movement via Art Nouveau and Bauhaus through to today‘s spectacular deconstructivist buildings. For generations, they have inspired renowned architects, craftsmen and artists and are used wherever high aesthetic, health and building physics demands are placed on architecture and colour design.

Today, we are the world's leading specialist for mineral building protection systems producing the most durable, purely mineral-based paints and system solutions for building exteriors and interiors. With products and services ranging from mineral plasters and fillers, wood systems, products for concrete repair and concrete cosmetics to thermal insulation systems for interior and exterior spaces as well as natural stone systems.

Paints made in Germany

From company headquarters in Germany, subsidiaries in Europe and the USA as well as worldwide sales partners: KEIM is available on the local scale everywhere to offer you top quality products and services around the globe.

"To produce the most natural, brilliant, healthy and durable paints, in other words, the best paints in the world!"

Adolf Wilhelm Keim felt an obligation to sustainability long before it had become a catchword. Up until today this premise shapes the way we think and do business way beyond the innovative use of natural raw materials, by creating regional jobs, showing due appreciation for our employees and being careful in the way we handle our limited resources. 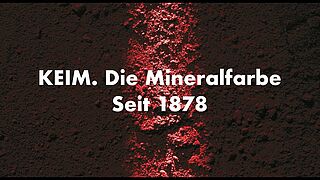 This video is only available in German language.

As early as 1885, the artist Christian Schmidt from Zurich imported Keim's mineral paint for Switzerland and used it in this country on various well-known objects. For example, on the facade of the National Museum in Zurich or the town hall and the "Haus+Pelikan" in Stein am Rhein. The Schmidt family was the sole importer for a good three generations and, with their valuable commitment, laid the foundation for the popularity and success of Keimfarben in Switzerland. Between 1965 and 1989, they were then imported by various companies. In 1989, the German Keimfarben GmbH from Diedorf near Augsburg founded the Swiss branch, Keimfarben AG in Heerbrugg. Four employees formed the founding team.

Since then, Keimfarben AG has grown and prospered, and now employs 25 people. In addition to its headquarters, now in Diepoldsau, Keimfarben AG also has eight branch offices in Zurich, Lucerne, Berne, Basel, Mezzovico in Ticino, Steg in Valais, Thurgau and Aclens in the canton of Vaud. In the so-called Baudialogen, not only products are sold, but in dialogue with all those interested in color, ways are sought to combine color, architecture and art individually, sustainably and beautifully.

Learn more about our company philosopy.

Learn more about our company history.

Read more about the advantages of our silicate paints in our company brochure!